Qadisha, one of the deepest and most beautiful valleys in Lebanon, is indeed a world a part. At the bottom of this wild steep-sided gorge runs the Qadisha River whose source is in the Qadisha Grotto at the foot of the Cedars. And above the famous Cedar grove stands Qornet el Sawda, Lebanon's highest peak.

The word Qadisha comes from a Semitic root meaning "holy" and WadiQadisha is the "Holy Valley." Filled with caves and rock shelters inhabited from the third millennium B.C. to the Roman period, the valley is scattered with cave chapels, hermitages and monasteries cut from rock. Since the Early Middle Ages generations of monks , hermits, ascetics and anchorites found asylum here. Even Moslem Soufis were found in this valley.

The Qadisha Valley area is surrounded by many important sites and villages like: 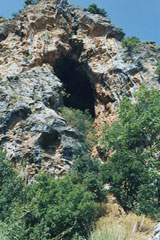 BqaaKafra highest village of Lebanon (1750 m), QornetEsSawda; the highest peak in Lebanon (3088 m), Hasroun; one of the last villages in Lebanon to preserve its traditional red-roofed houses; Qadisha grotto located between Bsharreh and the Cedars;

The Qannubin Monastery is on the northeast side of the Qadisha Valley. It is the oldest of the Maronite monasteries; although its foundation is often attributed to the Emperor Theodosius the Great in 375AD, it is more likely that it was established by a disciple of St Theodosius the Cenobite. For the most part it is cut into the rock cliff side - monastic cells, church, cloister, and accommodation for travelers.

Qannubin used to be the See of the Maronite Patriarch. 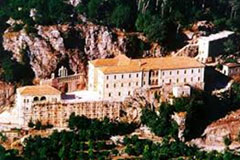 The Monastery of St Anthony of Qozhaya sits on the opposite flank of the Qadisha from Qannubin Monastery. Tradition has its foundation in the 4th century by St Hilarion, in honour of the Egyptian anchorite, St Anthony the Great, though the earliest documentary records date back only to around 1000AD.

It was destroyed in the 16th century but quickly restored. It comprises a corridor, meeting room, and chapel, with a mill and a number of hermitages cut into the rock nearby.

The Monastery of Our Lady of Hawqa

SaydetHawqa is situated at an altitude of 1150m between Qannubin and Qozhaya Monasteries, at the base of an enormous cave. It was founded in the late 13th century by villagers from Hawqa. The hermitage appears to have been located on a wide platform at mid-level, where there is a water reservoir fed by channels. The upper level, only accessible by ladder, is a cave some 47m long, where the wealth of medieval pottery and arrowheads that have been found suggests its use as a refuge. Traces of fortifications have also been found in the AassiHauqqa (cave) at 1170m altitude. Archaeological finds show that this cave was in use in Palaeolithic, Roman, and medieval times. 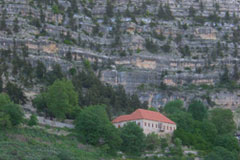 The Monastery of Mar Sarkis, also called Ras Al Nahr, overlooks Ehden, Kfarsghab, Bane and Hadath El Jebbeh. Given its exceptional location overlooking the valley at an altitude of 1500m, the monastery is called the Watchful Eye of Qadisha. It is dedicated to Saints Sarkis and Bakhos (Saints Sergius and Bacchus). The name Ras Al Nahr means the top of the river as it is in the vicinity of the Mar Sarkis source, the main contributor to the QlaynsiehRiver which joins the Qannubin River in the valley.

The first church of Saints Sarkis and Bakhos was built in the mid 8th Century A.D. on the ruins of a Canaanite temple dedicated to a god of agriculture. Next to it, another church dedicated to Our Lady was constructed in 1198 A.D. Several buildings were added from 1404 till 1690, when Patriarch EstephanDouaihy restored part of the buildings.

The monastery of Mar Elisha is perched on the cliff.
mentioned first in the 14th century, is shared by two communities, a Maronite solitary order and the Barefoot Carmelite order. It consists of three or four small cells, a refectory, and some offices; the communal church includes four chapels cut into the rock-face.

In 1998, UNESCO added the valley to the list of World Heritage Sites because of its importance as the site of some of the earliest Christian monastic settlements in the world, and its continued example of early Christian faith.