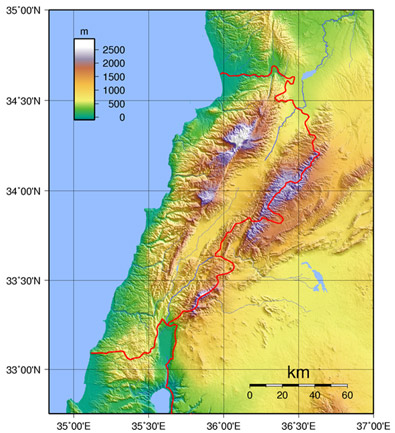 The country is roughly rectangular in shape, becoming narrower toward the south and the farthest north. Its widest point is 88 kilometers (55 mi), and its narrowest is 32 kilometres (20 mi); the average width is about 56 kilometers (35 mi).

Lebanon has a coastline and border of 225 kilometers (140 mi) on the Mediterranean Sea to the west, a 375 kilometers (233 mi) border shared with Syria to the north and east and a 79 kilometers (49 mi) long border with Palestine to the south. 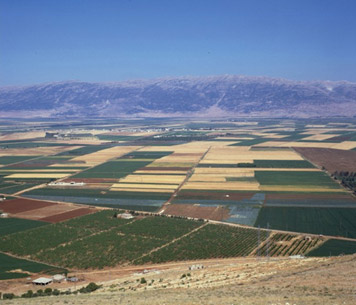 Lebanon is divided into five ribbons like topographical areas stretching mainly in a north-south direction:

The Lebanon mountains peak at 3,088 meters (10,131 ft) above sea level in Qurnat as Sawda' in North Lebanon and gradually slope to the south before rising again to a height of 2,695 meters (8,842 ft) in Mount Sannine.