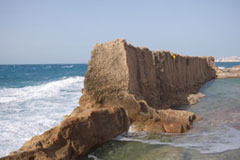 Batroun, on the coast 50 km distant from Beirut, is the southern gate of North Lebanon and the center of Batroun district. It is situated on a sandy beach-rock used as a quarry since antiquity. It is bordered by the Mediterranean Sea to the west, the foothills of Mount Lebanon to the south and east, and the Rasech-Chaqa‘a plateau to the north.

Batroun was once one of the most important Phoenician cities in the region. It is considered to be one of the oldest cities in the world, and because of that, historians place a lot of emphasis on this city. The name Batroun derives from the Greek word, Botrys, which was later changed to the Latin “Botrus”. Historians believe that the Greek name of the town originates from the Phoenician word,  bater, which means to cut and it refers to the maritime wall that the Phoenicians built in the sea to protect them from tidal waves. Other historians disagree and seem to think that the name of the town comes from the Phoenician words, beittruna, which translates to “house of the chief”- displaying this city’s past importance. 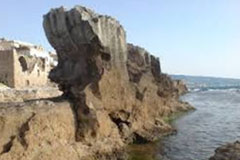 The “Phoenician Wall” of Betrounwas built in ancient times by the Phoenicians to protect the city from the wild ocean storms is still found today. It stand strong and proud in Batroun’s bay, and is a must see for an authentic piece of Lebanon’s ancient history. Batroun also has a beautiful old stone souk, which attracts visitors from all around Lebanon. With old stone, beautiful wooden doors, and goods any person would love to get their hands on, it is a must see in this city.

The length of the wall is 225m., its width on the top between 1m and 1.5m.. This stood against sea storms and invaders.