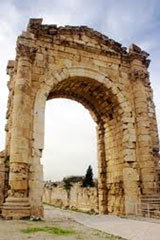 A triumphal arch is a monumental structure in the shape of an archway with one or more arched passageways, often designed to span a road. In its simplest form a triumphal arch consists of two massive piers connected by an arch, crowned with a flat entablature or attic on which a statue might be mounted or which bears commemorative inscriptions. The main structure is often decorated with carvings, sculpted reliefs and dedications. More elaborate triumphal arches may have multiple archways.

Triumphal arches are one of the most influential and distinctive types of architecture associated with ancient Rome. Thought to have been invented by the Romans, the triumphal arch was used to commemorate victorious generals or significant public events such as the founding of new colonies, the construction of a road or bridge, the death of a member of the imperial family or the accession of a new emperor.

The Triumphal Arch of Tyre is one of the city's most impressive archaeological relics. The arch stands over a long avenue which has a necropolis on either side and sarcophagi dating as early as the 2nd century BCE. The Triumphal Arch had fallen apart but was reconstructed in modern times and today is fairly close to what it probably looked like for the ancient world.