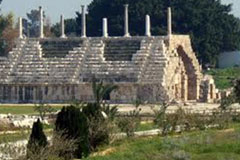 Tyre Roman Hippodrome is located in Al Bass site, is a 480 meter structure which once seated 20,000 spectators who would gather to watch chariot racing. It’s the biggest and the most preserved Roman hippodrome in the world. The hippodrome arena was used for very popular and dangerous chariot races. Usually a hippodrome is a stadium designed for horse racing and especially chariot racing. In shape the hippodrome was oblong, with one end semicircular and the other square; it thus resembled a U with a closed top. Seats ran in tiers the length of the arena and along the curve, while at the straight end dignitaries occupied seats above the Arena’s.

Throughout the Roman period, the Hippodrome was the centre of the city’s social life. Huge amounts were bet on chariot races, and initially four teams took part in these races, each one financially sponsored and supported by a different political party. Metae (turning stones), which you can still see, marked each end of the long, narrow course. The tight, high-speed turns at the metae were the most exciting part of the race and often produced dramatic spills and collisions. 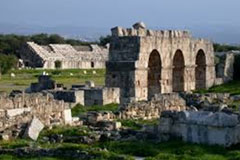 These races were not simple sporting events, but also provided some of the rare occasions in which the Emperor and the common citizens could come together in a single venue.

best-preserved Roman hippodrome in the world - larger even than the Circus Maximus in Rome herself. This hippodrome is very unusual in that it is built of stone rather than the usual brick and the acoustics are so good that whispers carry very well from one side to the other.