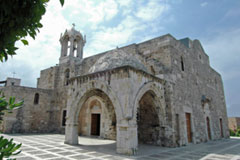 Immediately after they get into the city of Byblos, crusaders started working to construct: buildings, fortresses, citadels, enclosures and churches for example: The Saint John-Marc Cathedral which was build in 1115 A.D.

Several theories explains the definition of the Patron staff of the Cathedral; some said that Saint John-Marc was the first to set up the 1st Christian group in Byblos during their travels from Jerusalem to Asia Minor, as a result of that, this group built a church under the name of its founder and Bishop Saint John-Marc.Others said, that the named bishop built the church according to John the Baptist than they changed the Church’s’ name to Saint John Marc Cathedral , as this church was built, on the ruins of an idolatrous temple, than it was ruined in 555 A.D. because of an earthquake.After that, crusaders rebuilt the actual church. Therefore, the marinate synaxarian mentioned that the historical church of Saint John-Marc relates to the Apostles era and was rebuild by the crusaders. 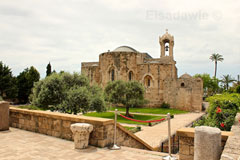 But, the Jesuit father, Joseph KODAR, mentioned that the crusaders dedicated the church to the Virgin Mary as a votive offering when they blockage the city in 1103 A.D.

In addition, the architect Kamal ANLAR said that the main altar is dedicated to Saint John the Baptist as the altar of North is for the Virgin Lady. but, one of the citizens of Byblos certified that the Church between 1910 and 1937 was consecrated to honor Saint John the Baptist, the proof of that is the oil painting for this Saint referring to year 1909, this matter stayed to year 1937 when the painter Habib SROUR accomplished his painting of the evangelical Saint John-Marc and the Patriarch John-Maroon which was copied from another painting with (unknown date). 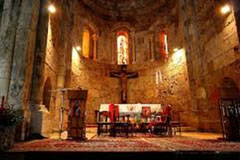 During the 12th and the 13th century the Ayybiens the crusaders and the Mamluks rebuilt a part of the Church precisely the western part, after it was ruined by the earthquake of 1170 A.D.

In the 4th century the Mamluks armies get into the city of Byblos and despoiled it after John the crusade prince of Byblos traveled with the citizens by boats during the night.

At the end of the 15th century, some Shiite tribes entered the Maronite earth followed by a hamadiah tribe that governed the cities of Byblos and Batroun for a period. Byblos failed down under ruination until the regime of Prince Yussef AL SHAHABI (1763) who was 16 years old. 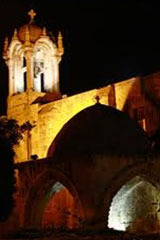 Sheikh Assad GERMANOS described the occupation of Byblos (from 5 to 15 October 1763) by the following: «the history of the city of Byblos get the end when the AL TFANKAJIAH division under the guidance of Eid AGHA, governed the city of Byblos after they abused the citizens they also faired the Husamist, from the city, knowing there are Sunnites to, but they were favorable disposed to prince Yussif AL CHEHABI, they transformed the church of Saint John Marc they transformed the church of Saint John Marc to a «stable» for their horses. The prince and his assistant blockage the city because its wall was strong and secure, the local army couldn’t enter to it, until the general principal of the order, Father Emmanuel AL RASHMANI asked Sheikh Saed AL KHOURY to occupy the city with the friars, in the condition that, all the city churches must be under the Order Occupation, he got the accord after the consultation of the Prince YUSSIF.

At the night, Father Emmanuel gathered the 200 friars. After getting dinner, they slept .than, early at the end of the night, they prayed and moved to the cloture gate and climbed it using their leather belts, than opened the city gate for the Prince army who entered it with victory. 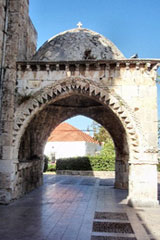 As he promised the order, Prince Yussef provide to them, all the city churches as an eternal propriety. The friars cleaned the church and washed it with the water of roses», and resanctified it, they also built a sanctuary for the Virgin Mary on the gate of the city, which is actually «The Lady of the gate» sanctuary.

In 1767, prince Yeses presented to the Lebanese friars the church of Saint John-Marc as the building attached to according to a little deed reserved in the Ontoch registers which is the following: «we gave the big church. In the city of Byblos, to our dear Lebanese friars headed by the priest Emmanuel (the superior), the proprieties are free from any casualty or other debts etc; we also gave them the legal authority. Our word is free from any preemption or liability … he asked them to rebuilt it and to reserve it.

In September 1840, a part of the Church’s west facade was ruined because of the English navy during the war against Abraham Pasha at the end of Prince Bachir the 2nd government, but it was restored. With the care of Father Rafael AL ZOGHBI, (1857), it came true to suspend again the bell after the permission of the Sultan Abed ALHAMID to suspend the churches bells. 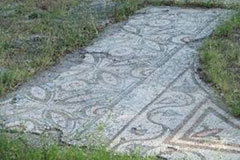 In the calendar of the Ontoch (April 1910) the marble altars, the flagstones and the balustrable that separate the choir from the nave (which was removed and replaced after) and the actual dome of the bell which refers to the 20th century (1904-1910) adding to that, the sustainment works of the roofs and molding it with cement after ruining the gray roof (in 1938). But the wall paintings were take off in 1945, but between 1970 and 1975, talking about reconstruction works, the general department of monuments did some excavations around the church.

These works showed bezant mosaics which is currently fixed on the east of the Ontoch, as it took on charge the rebuilding of the church and its environments, so it repaved the floor with rocky stones and with pebbles the floor of the outside yards, the woody doors were changed as the windows and the glass. But the cloture of the church refers to year 1989, the host place is dated 1990 and the water infiltration works come to year 1993.