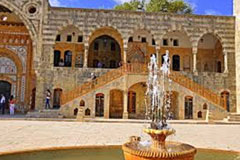 Beited-Dine  is a small Lebanese town in the Chouf District, approx. 50 km southeast of Beirut and near the town of Deir el-Qamar from which it is separated by a steep valley. The town is famous for its magnificent BeiteddinePalace which hosts the Beiteddine Festival every summer.

A 19th-century palace in Beiteddine, It hosts the annual Beiteddine Festival and the Beiteddine Palace Museum.

The palace was built by emir Bashir Shihab II in the period between 1788 and 1818. It was the emir's residence until 1840. Afterwards the building was used by the Ottoman authorities as the government residence.

Later, under the French Mandate following World War I, it was used for local administrative purposes. The General Directorate of Antiquities restored the palace after it was declared a historic monument in 1934. After independence in 1943, the palace became the summer residence of the President of the Republic.

Dar El Baraniyyeh, The outer section of the Palace
On the approach to the palace a large parking area offers some of the best views of the buildings and grounds. The main entrance leads to a 107x45 meter courtyard, Al-Midan, where horsemen, courtiers and visitors used to meet for various gatherings. From here, too, the Emir would leave with his retinue in solemn procession, either for war or for the hunt.

Dar El Wousta, the middle section of the Palace. 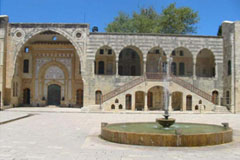 The entrance to the central section of the palace is from a double stairway at the far western end of the courtyard, where a bust of Kamal Jumblatt stands. From this point on, the impressive but austere appearance of the outside court and buildings gives way to the delightful architecture and greenery that has given Beiteddine its nickname of Lebanon's Alhambra.

From the main entrance of this wing a vaulted passage at the top of the double staircase turns to the right, towards the apartments of
The Hamade Sheikhs of the Shouf who were responsible for the protection of the Palace.

A turn to the left brings you to the offices of the Emir's Ministers. The wing opens out onto an elegant courtyard whose fountains accent the graceful arcades on three sides of the court is completely open in order to provide full enjoyment of the countryside.

Dar El Harim, the private apartments.
At the far end of this courtyard rises the Dar El Harim, composed of a large and richly decorated façade, the Upper Harem, the reception room or salamlik, the Lower Harem, the kitchens and the baths.

The monumental archway opens on the left to the reception wing, which is made up of a waiting room and a hall. These are by far the most ornate room in the palace. 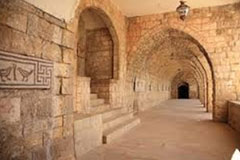 The waiting room has a single column supporting the vault and is known as "the room of the column". The reception hall itself, or salamlik, is built on two levels, the first notable for a fine mosaic floor and walls covered with carved marble, sculptures and inscriptions. One of these inscriptions reads:" The homage of a governor towards God is to observe justice, for more than a thousand months of prayer."

Emir Bechir sat on the raised platform at the bay end of the room, smoking his long pipe or narguileh, as he dispensed justice with dignity and absolute power. Here the emir held court and carried out the business of his emirate.

On the right of the entry door is the Upper Harem, with the so-called "Lamartine's room" and another important room called "Mahkamat", or tribunal.

The corridor leads to the Lower Harem with the private apartments of the emir and his family set around a courtyard enclosed on four sides.

Two liwans on the sides of this court allowed the family members to enjoy the fresh air.

On the angle of the Upper and the Lower Harems are the kitchens where servants prepared the daily meals for more than 500 people. The food was taken  from there to the reception and living areas where it was placed on trays set in front of the divans of the notables and their visitors. From the balconies of the Dar El Harim, which look out across a vast terraced valley, can be seen the most spectacular view of the palace's surroundings.

Hammam, or Baths
At the northern edge of the Dar El Harim section is the "hammam", one of the most beautiful in the Arab world. Following a tradition dating to Roman times, these baths comprise a cold room or frigidarium, used for undressing and for relaxation before and after the bath. In this reception room one could discuss politics or literature or listen to the latest rumors.

the second section of the baths comprise the lukewarm room, or the tepidarium. This was used for massages and served as a transition between the cold and warm sections. The third part comprised the warm rooms or caldarium. The paving stones of the baths were supported by brick pillars and vault with heated air passing underneath.

Beyond the baths is the tree-shaded tomb of SittChams, the first wife of the emir. She is buried in a domed tomb
Hammam:the cold roomsurrounded by cypress trees in the corner of the gardens. When the ashes of the emir were brought back from Istanbul in 1947 they were placed in the same sepulcher.

The Stables and the Mosaic Exhibition

Dar El Wousta and Dar El Harim are built over a series of recently and beautifully restored vaulted stables that used to accommodate 600 horses and their riders, as well as the 500 foot-soldiers of the emir's guard. Today these stables hold an extensive collection of Byzantine mosaics. The largest of them come from the ruins of a Byzantine church in the coastal city of Jiyyeh, south of Beirut. the Greek inscriptions appearing on the mosaics date them to the 5th and 6th centuries A.D. Mosaics from other sites are displayed in these stables and the adjacent gardens.

Near the mosaic museum is the hermitage, or Khalwa, a place of religious seclusion for the Druze. This large room in existence long before Emir Bechir built the palace, has been restored and is open to visitors.