Hadjar el Gouble (the Stone of the South)  1,170 metric tons 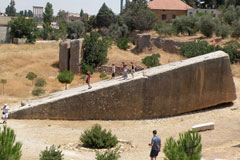 In a quarry about half a mile away from the Trilithon is an even bigger block  It  measures 69 x 16 x 13  feet, ten inches, and weighs about 1,170 metric tons. There is a belief, the block was slated for the retaining wall, but was later found to be too big. Thus, it was abandoned in the quarrry while still joined to the bedrock at one end.

The important question is, was it younger, or was it older than the three Trilithon blocks? It seems that it had to be made later than the Trilithon. If it was made first, and then deemed to be too big, it would have still been utilized. Rather than quarrying a new block, the Romans would have simply whittled the big block down to a more manageable size. We would not see it in the quarry today.

On the other hand, despite their brilliant ability to move about burdens as unprecedented as the Trilithon, the unknown architects lost their nerve at the very end,  the big block looming almost ready. There was no attempt to move the practically finished block despite the recent brilliant successes with transporting the other blocks. This just does not behoove the solid Roman engineers, especially the creme de la creme entrusted.