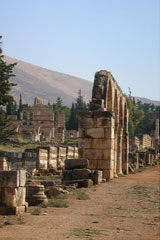 Founded during the Umayyad period under Caliph Walid Ibn Abd Al-Malak (705-715), the city of Anjar bears outstanding witness to the Umayyad civilization. Anjar is an example of an inland commercial centre, at the crossroads of two important routes: one leading from Beirut to Damascus and the other crossing the Bekaa and leading from Homs to Tiberiade. The site of this ancient city was only discovered by archaeologists at the end of the 1940s.

Anjar is an outstanding and closely dated example of Umayyad urbanism and it also stands unique as the only historic example of an inland commercial centre. The ruins in the Beqaa, not far from the roads that link Homs and Baalbek to Tiberias and Mount Lebanon to Damascus, were discovered when archaeological explorations began in 1949.

Located on a site that was occupied over a long period (re-employed elements of Greek, Roman and early Christian buildings are frequently found in the masonry of its walls), the city of Anjar was founded at the beginning of the 8th century by Caliph Walid I (705-15). It takes its name from the Arabic term ayn al-jaar (water from the rock), referring to the streams that flow from the nearby mountains. 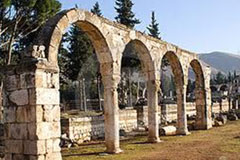 This surprising urban creation, which was never completed, had only a brief existence in 744. The partisans of Caliph Ibrahim, son of Walid, were defeated outside the walls of Anjar by Marwan ben Mohammed, who became the last Omayyad caliph. After this, Anjar, which was partially destroyed, was abandoned. Like Abu al Fida after him, William of Tyre saw only ruins, the results of numerous battles of the 12th century. It is the only non-coastal trading city in the country, and it flourished for only 20-30 years before the Abbasids overran the city and it fell into disuse. At its peak, it housed more than 600 shops, Roman-style baths, two palaces and a mosque. 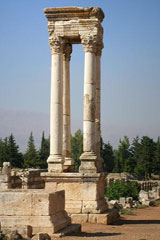 Excavations have revealed a fortified city, enclosed by walls flanked by 40 towers where an inscription from 741 may still be seen in situ. The rectangular fortified wall (385 m by 350 m) is precisely oriented. The walls are 2 m thick and built from a core of mud and rubble with an exterior facing of sizable blocks and an interior facing of smaller layers of blocks. Against the interior of the enclosures are three stairways built on each side. They gave access to the top of the walls where guards circulated and protected the town.

Dominated by gates flanked by porticos, an important north-south axis (cardo maximus) and a lesser east-west axis (decumanus maximus) are superimposed above the main sewers and divide the city into four equal quadrants. Public and private buildings are laid out according to a strict plan: the principal palace and mosque in the south-east quadrant; the secondary palace and baths in the north-east and north-west quadrants; the densely inhabited south-west quadrant criss-crossed by a network of streets built on an orthogonal plan.

The urban spatial organization, which is remarkably devised, is more reminiscent of that of a royal residence (of which the city-palace of Diocletian at Split remains the best example) than that of the Roman military camps and colonial cities. The ruins are dominated by the spectacular vestiges of a monumental tetrapyle, at the crossing of the two principal axes, as well as by the walls and colonnades of the Omayyad palace, three levels of which have been preserved. These structures incorporate sculptures from the Roman period, but are notable as well for the exceptional plasticity of the elements of the contemporary decor within the construction. 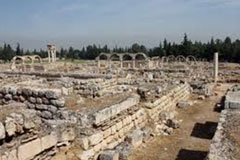 More evidence of the Umayyad dependence on the architectural traditions of other cultures appears in the Umayyad baths, which contain the three classical sections of the Roman bath: the vestiary where patrons changed clothing before their bath and rested afterwards, and three rooms for cold, warm and hot water. The size of the vestiary indicates the bath was more than a source of physical well-being but also a centre of social interaction.

A city with 600 shops and an overwhelming concern for security must have required a fair number of people. Keeping this in mind, archaeologists looked for remains of an extensive residential area and found it just beyond the tetrastyle to the south-west.