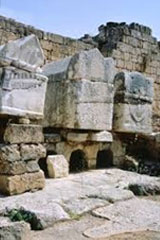 The necropolis, excavated in 1962, yielded-hundreds of ornate stone and marble sarcophagi of the Roman and Byzantine periods. Foundations of a Byzantine church can also be seen. The archway stands astride a Roman road that led into the ancient city. Alongside the road are the remains of the aqueduct that assured the city its water supply.

Several tombs have Greek inscriptions or the names of those buried there, or their trade such as "wealthy purple dye manufacturer." Others have sculpted reliefs of works from Homer and others.