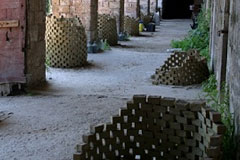 Soap making in Lebanon is an old craft established more than a thousand years ago. Handmade Lebanese soaps have been sold through the ages to the Arabian countries and Europe. The BadrHassoun family has been involved in soap making for 500 years.

The Soap Khan ( Khan Al-Saboun ) was built at the beginning of the 17th century by Yusuf Al-Saifi, pasha of Tripoli. This imposing rectangular structure was built in the center of Tripoli to help the pasha control any uprising. Its two-story high corridors surround a courtyard with a fountain.

During the battle of Anjar, which took place on Oct. 31,1622, Yusuf Pasha was taken prisoner. When Tripoli fell to Fakhreddin, the Ottoman soldiers fled to join his routed forces in Syria. Fakhreddin’s army occupied the barracks briefly but in the following years the building stood empty.

The BadrHassoun Family continues to make olive oil-based soap as they have for the last centuries. Some historians acknowledge, that chemists from Tripoli were the first to process soap. Traditionally, a bride was given an assortment of scented soap, before leaving for her husband’s house. Soap was considered a symbol of purity. However, when this tradition began to die out, so did the soap makers.